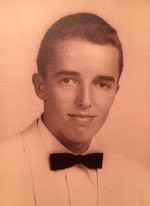 Thomas L. Clasby, 81, of Louisville, passed away on October 21st, 2019.
He was preceded in death by his parents and by his wife, Jenny Bocko Clasby, his sisters Doris Cull and Alice Showalter, and by his brothers, Bill and Michael Clasby. He is survived by his children, Leigh Clasby Viner and Christian Clasby, by his grandson, Nathan Viner, and by his sister, Kathryn Slucher, who, along with her son Steve, cared for him lovingly during his last years.
Tom grew up in the West End where he attended Christ the King grade school and Flaget High School. He served in the Army and was a graduate of the University of Louisville. Tom worked at DuPont for 27 years, and worked for several more years at the Louisville Free Public Library after retirement.
Tom was a funny, mischievous, curious and generous person. He loved and cared for his family and friends. He had a great passion for sports and was an avid jogger.
Visitation will be 4:00-8:00 p.m., Friday, October 25, 2019 at Highlands Funeral Home, 3331 Taylorsville Rd., Louisville, Ky 40205. Services will be 11:00 a.m., Saturday, October 26, 2019 at Calvary Cemetery.
Memorial gifts may be made in his honor to his favorite charity, Home of the Innocents.

All rights reserved. This obituary is also archived at obittree.com